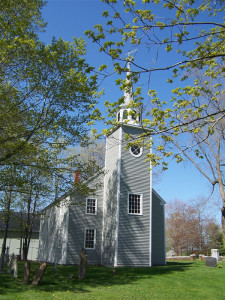 The Covenanter Church is a two-century-old church in Grand Pré. This Provincial Heritage Property and National Historic Site is part of our Pastoral Charge.

Heritage Designation- Under the guidelines set down by Heritage Nova Scotia and Heritage Canada, a building or property is deemed to have an heritage designation when its original structure is maintained as much as possible. At the Covenanter, examples of its original structure can be seen in the glass windows and their frames (notice the waviness and thickness of the glass), as well as the two pulpits with sounding board above. 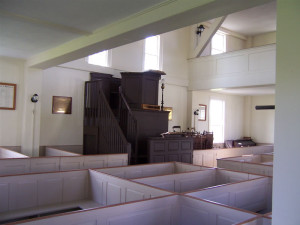 The style of pews or boxed pews, also original, were “rented” by families – with the best seats going to those whose tything and extra giving outmatched others. The balcony would have been the place where farm labourers and slaves sat. The Covenanter Heritage Committee oversees the maintenance of the building and the Horton Cemetery Committee cares for the burial site that surrounds the church, both with an eye to preserving the Heritage designation.

Our Summer Series and Christmas Eve Services help us to generate the funds needed to continue keeping this wonderful heritage property available for everyone’s use – hopefully for generations to come.

Summer Series:
Sunday Worship is at 11:00 am beginning the first Sunday in July and ending on the last Sunday in August. 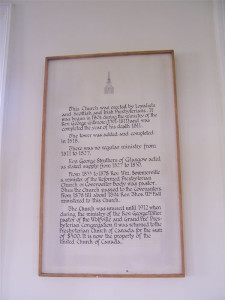 History of the Covenanter Church-The Presbyterian congregation had its beginnings around 1767 when Rev. James Murdock became the first settled minister. The present church was built under the leadership of Rev. George Gilmore. Erected by Loyalists, and Scottish & Irish Presbyterians, it was begun in 1804 and completed in 1811. The tower was added in 1818. There was no regular ministry from 1811-1827. Rev. George Struthers of Glasgow, Scotland, acted as a stated supply from 1827-1830. Rev. Wm. Sommerville, a minister of the Covenanted Reformed Presbyterian Church, ministered from 1833-1878. Thus the church passed to the Covenanters. Rev. T. McGall ministered 1878-1894 and then the church remained unused until 1912.

During the ministry of Rev. George Miller, pastor of the Wolfville and Grand Pré Presbyterian congregation, it returned to the Presbyterian Church for the sum of $300. In 1925 the Methodists and Presbyterians united to become part of the United Church of Canada. The former Methodist Church was used by the newly formed congregation but was destroyed by fire in 1961 leaving the Covenanter Church to serve until 1967.

In 1967 Grand Pré & Wolfville united to form the St. Andrew’s congregation. Maritime Conference designated Covenanter Church an Historic Site in 1972. This enduring venue continues to fulfill the role of “chapel” hosting several weddings and special services each year. Also, regular worship services take place Sunday mornings at 11am during July and August and each December at 11pm on Christmas Eve.

Enid Kelley Endowment: An endowment was established by private sources to help pay for ongoing maintenance of the Covenanter Church in honour of Enid (Dearie) Caldwell Kelley, 1895-1988, from Sweets Corner, Nova Scotia. Dearie loved this church and was a descendant of the founder, Reverend George Gilmore.
Thanks to Richard Novosiltzeff of for sharing his panoramic photo of the church on 360Cities and the three panoramic stills at the bottom of the page. 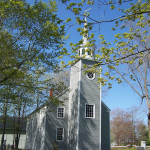 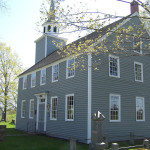 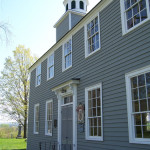 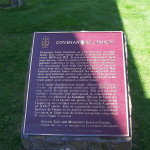 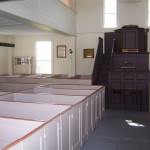 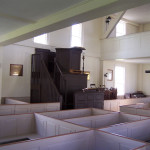 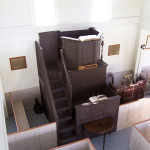 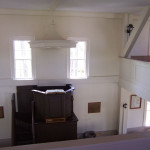 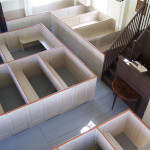 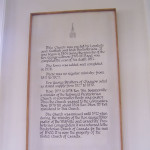 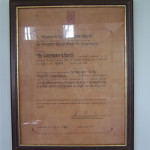 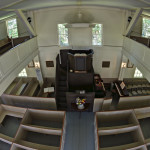 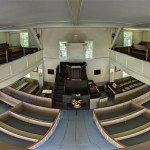 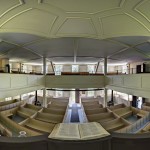