The roots of the amalgamating churches go back to the very early churches in the eastern Annapolis Valley, which included the New England Congregationalists, Scottish and Irish Presbyterians, and English Methodists. It is a history of building and demolishing churches, cooperation and unions of churches, and rebuilding again. This is not unlike our present history.

The Covenanter Church, a two-century-old church in Grand Pré, is part of our Pastoral Charge. It is a Provincial Heritage Property and National Historic Site.

Beautiful panoramic photos of four of the five church buildings 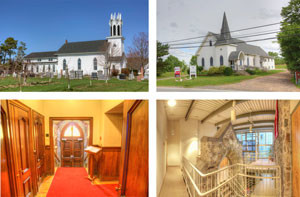 Many thanks to the Kings County Historical Society and especially photographer Paul Illsley for these wonderful photos of these  four buildings which are no longer being used as United Churches.